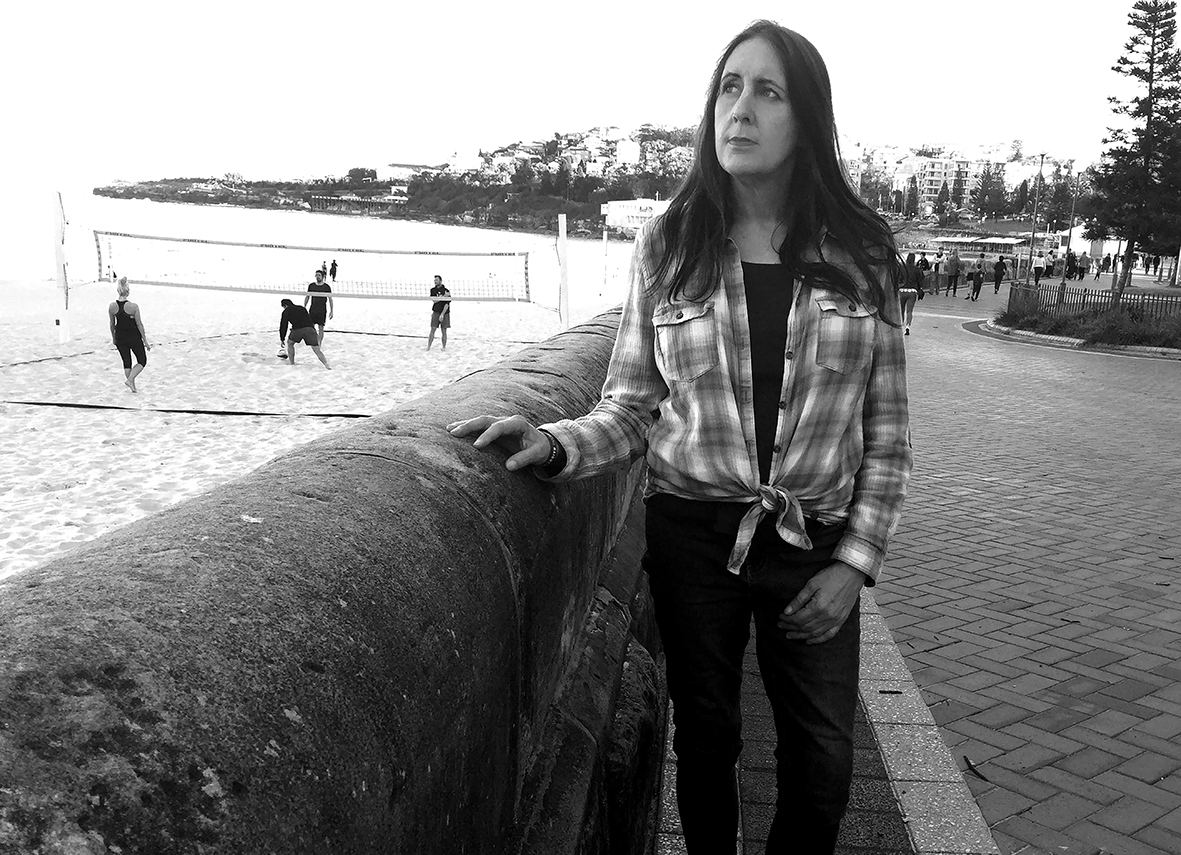 “Silent tears for me are tears that no one can see. They’ve been internalised and they’ve been like waterfalls, crying on the inside. I’ve had to show strength and be tough and put armour on the outside. And crying, I guess, as a child did me no good and it just caused… to be bashed, a slap in the face. So I used to visualise, even back then, oh my god I’m just realising that now, that I used to yeah, cry on the inside so– yeah people thought I was weak if I was crying. Yeah, so I just have the silent tears on the inside so they wouldn’t say I was weak.

Probably at a really young age, about maybe about 6 I realised my life was different because I didn’t see other people’s parents in drunken states all the time or drugged out and I saw people have food to eat and I saw families go out and experience life together and go on picnics and get their needs met. When I was a child it was most horrific childhood that I could ever imagine. It’s something that I’d hate any child to go through.

I was– I went through all forms of abuse: sexual, physical, mental, emotional, spiritual, incest, bestiality, child pornography and neglect. Roughly from the age of 4 to 14 yeah. And the only reason why it stopped was because my mother died. When mum died I had mixed emotions. It was a feeling of like, oh my god, thank god it’s over. It can stop now. The morning that my mother died, I found her dead and I was shaking her trying to wake her up and I was just swearing at her and calling her a fucking slut, ‘wake up! Wake up!’ not realising she was dead and I slept that night and still found her there in the same position the next morning. So it was a feeling of relief, but also sadness. So it was mixed emotions.

I didn’t have a door on my bedroom. It was easy access for the perpetrators to gain, so there’d be a curtain hanging there or something. So I’d be sexually assaulted and I’d literally lie there and it’s amazing how my brain tapped into coping mechanisms. I’d actually leave my body so I wouldn’t feel anything and I’d float about it and just space out and watch what was going on. I’d even leave my bedroom physically and think it would be safe to sleep in the lounge room because no one surely would attack you from in there. They fucking did, that didn’t stop them. They continued in the lounge room on the lounge. I remember just not knowing what to do and once again leaving my body and disassociating with it all. I even thought a third place that would be safe would be my mother’s bed with her, not so. I was even fucking violated in the bed with my mother right next to me. So my mum, my mother’s boyfriends, and me. Yeah, so I had nowhere safe to go. Absolutely nowhere safe to go.

So the only thing I did to rid this shit and try to get it off me was to scrub myself. I used to scrub myself with steel wool or with anything I could find to try and get rid of the shit, the shame, the pain and become clean again. And then the violation started from the borders as well. They used to lock me in the laundry and make me masturbate the dog and do sexual acts and take photos at the same time. I don’t know if there was film in the camera or not, but he used to have a knife held up to my throat and I had to perform these acts time and time again and I just wanted these people to fuck off and die. And leave me alone. And then I wanted to die. I just felt, just dirty. Unwanted, used, abused. Who would ever want me in life? But somehow I just kept going.

I used to watch The Brady Bunch as a kid. And I used to think oh my god, how unreal to have a family like that and the love and it was, you know, everyone was together and happy and singing and food on their plate. We never had food on our plate. My diet was probably toast. That was it. Toast and we’d have– mum would give me eggs to wash my hair or beer to wash my hair. We had no toothpaste; we’d have to use salt. You know, just the basic needs weren’t even met.”

As a human being I have difficulty understanding the motives of people who are involved in the abuse of children. What makes them cross this very sacred of lines? How does a parent get to the point when they cease to be protective of their own child? Some abusers learn to be abusive from their families. Their experiences as children have cemented in their minds that abuse is tolerable, and even ok. It is a way of the more powerful exerting control over the weak and vulnerable, just as they experienced.

As in Rochelle’s story, some abusers most likely know the horror of being a child victim themselves. Why then didn’t they opt out of becoming as adult abuser, like Rochelle did? For many abusers there are only two roles available – abuser or victim. So, some choose control – the control of an aggressor – and this becomes the standard in adult and parenting relationships. The fact that others are damaged by this behaviour is largely repressed and their empathic capacities are limited.

In the Australian context, abuse of children within the home is serious and widespread. In 2013/14, just under 41,000 children were the subjects of substantiated reports of child abuse – 39% for emotional abuse (often associated with exposure to domestic violence), 28% for neglect, 19% for physical abuse and 14% for sexual abuse. And while some children are removed either temporarily or permanently from their families, many remain there, get limited or no help, and much abuse goes unreported. Data from a 2012 Australian Survey about Personal Safety estimated that 839,400 adult women first experienced physical abuse and 515,200 first experienced sexual abuse as a child aged between 0 and 14 years of age – at the hands of a family member. Almost 60% experienced the first violent incident between the ages of four and nine.

Experiences of abuse have significant immediate and long term negative impacts on the development of a child and their formation as an adult. Children may live in constant anxiety and fear, have difficulty sleeping, concentrating and learning. They may act out or withdraw and frequently suffer from a range of chronic physical and mental health conditions. Over the longer term, risk taking and substance abuse is more likely, and they experience significant barriers to achieving stable living conditions and employment, forming trusting healthy relationships and a developing sense of belonging in the world. A person’s sense of self-worth that is dashed in childhood, follows that person into adulthood.

But yet there is something else that needs to be said about Rochelle’s story. This is also a story of remarkable resilience. A little rock that cannot be moved or broken. There is something that made Rochelle a Little Rock – strong in the face of the unspeakable crimes committed against her. She has chosen to tell her story so that we might understand and act on our collective responsibilities to protect children.

Tragically, there are more Little Rocks out there than we would like to imagine. We cannot, in a civilised society which purports to respect and uphold human rights, continue to ignore the all too pervasive abuse of children. We need to open up those closed doors, no matter how confronting. We need to see and hear all those silent tears that children have and still shed. We must call out abuse and break the victim-abuser dynamic. And, we must aspire to be that village raising children – a village whose members genuinely respect, listen to and embrace every child.

Megan Mitchell is Australia’s first National Children’s Commissioner at the Australian Human Rights Commission, appointed in 2013. As Commissioner, Megan focuses solely on the laws, policies and programs that impact on children and their rights. Megan has extensive experience in issues facing children from all types of backgrounds, including vulnerable children. In 2014, Megan presented her statutory report on children’s rights to the Federal Parliament, in which she examined intentional self-harm, with or without suicidal intent, in children and young people under 18 years old. In 2015, her statutory report examined the impact of family and domestic violence on children.

‘When I was a child, it was the most horrific childhood, that I could ever imagine, its something that I hate, any child to go through. I was…uhm…I went through all forms of abuse, sexual, physical, mental, emotional, spiritual, incest, bestiality, child pornography and neglect. Time and time again….and I just wanted these people to fuck off and die, and leave me alone…..and then I wanted to die, I just felt just dirty, unwanted, used, abused, who would ever want me in life. So the only thing I did to rid this shit, and try and get it off me, was to scrub myself. I used to scrub myself, with steel wool, or with anything I could find to try and get rid of the shit, the shame, the pain and become clean again. But some how I just kept going.’