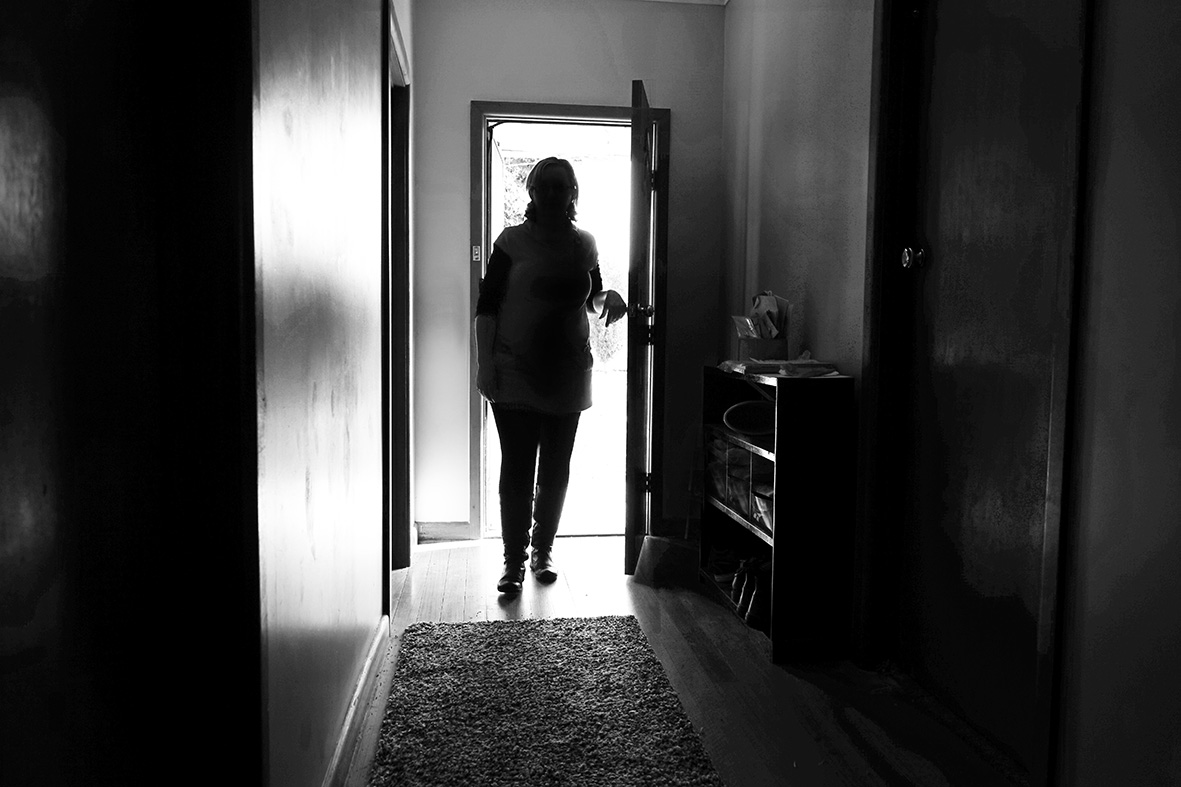 “My silent tears actually not silent anymore. I have had a long time of abuse. I come from parents that really didn’t know how to cope with me with a disability and one would try and back me up in cotton wool and the other one would just have his head in the sand so he didn’t really understand how to cope with me. And I grew up in a very volatile environment, because they just didn’t get on with each other very well. And then I’ve had, you know—then it sort of went from there to school—I was sexually assaulted at school. I’ve forgotten, like it disappeared off my mind and then it wasn’t until I was in a relationship with somebody up here that here it all came back to me. I don’t remember exactly how old I was but I know it did happen to me. It happened from behind so I don’t know to this day who did it. The school didn’t know anything about it. I kept my mouth shut. I didn’t tell my family until last year. And to this day they all think I’m talking crap. Lead me to believe nothing changed. And then I left home and I was in a— I was again assaulted by a partner and then again later on I got into a violent— domestic violence situation where I was very— I was kept in prison. Like a prison in my own home. I couldn’t say anything or look at him in a certain way without him giving me a wallop or doing other things to shut my mouth. And towards the end it got so bad that he tried to kill me. All the way through I’ve always had this faith in God and my faith— I sort of just said a prayer one night because I was so desperate ‘cause I knew it wasn’t long before he killed me properly. And my prayer was answered pretty much the next day. I had been working with work colleagues and they helped me move out of the house that I was living with this guy. And to this day I don’t know where he is or what he’s doing. I don’t want to know. I just want to know that he’s off the street but I’m still very much— I’m free up here so long as he doesn’t show his face.
Even though— like I’ve moved on. And, you know, I’ve got a great life now. And I want to show that there is life after those silent tears. I can smile again. I can laugh. I’ve got a job. I’m at school. My relationships have improved somewhat too with my family. I’ve come out in the open with all the stuff that happened as a child to my parents. Everything has come out and there’s that inner peace inside of me like I’ve never had before. So, I’m free from this abuse that I’ve had for so many years. The whole idea that people like my school teacher tried to beat my disability out of me. And now I’ve had, you know, people– various people have tried to do stuff to try and get this disability out and it doesn’t happen/go away.
My future would be to find a loving husband. Someone who can accept me for me with all my disabilities and not use it to get his own way like previous partners have. Where I worked was a very close-knit little group and they were like a second family to me. I was just sitting in the tearoom and I said, ‘Look I want to leave but I can’t leave on my own. I need help’. I was too afraid of what he would do next. So I just quietly just disappeared pretty much. So once work finished I was gone. I’d gone home to my family. I don’t— I’m not angry at him. I was angry at the time but eventually forgiven him for the pain and suffering that he’s caused me. Because, to help me heal– I feel sorry for him because he missed out on a fantastic opportunity to spend the rest of his life with me. And he missed out on that chance. He could never take that away. He didn’t ever take that way. The inner core, the inner soul, the inner—I don’t know what it is. That core that everyone has. No one can take that away from you. No one. No matter how hard they try. They know— I just know no one can take that away no matter how hard—how painful, how mean people can be towards— people will help if you’re in trouble and there are people that will help.”

‘Violence is gendered. In Australia we live in a culture where gender discrimination permeates every part of, and is at the basis of the very structures of our society. Women are still locked out of decision making processes in government, out of the workforce and therefore into poverty, where financial insecurity becomes more precarious as we age. For women with disabilities we add the double jeopardy of disability discrimination. This creates a further power imbalance, producing multiple layers of disadvantage. We are amongst the poorest of the poor. Although society may disadvantage us, we are no different in our desire for love, acceptance and fulfillment. And it is in this very normal desire that we are exposed to those who derive their power through exploitation and control. It is hard to develop inner resilience and self-belief when our society worships the perfect body, and these images of the body beautiful constantly remind us of our “otherness”. Even before we have words to express our feelings and emotions, subliminal messages surround us – that we are different and through this not worthy of love. In overt messages, teachers, medicos, relations, neighbours, tell us, women with disabilities, that we are asexual, that we should not breed; we must be denied the love and joy of having children. And so, there is little information given to enable our development of understanding of affection, of respectful relationships or for the legitimate expression of our sexuality. But still our yearning for safety, love and acceptance continues. And this is a control and violence trap, in which too many women with disabilities are caught for too long, because there are too many barriers which block our pathway to safety and security. The home becomes a prison. Who can you tell? Family has never been supportive, and no authority or court believes the woman with disabilities. Where could you go? For a deaf woman the wider world does not welcome you, but makes your isolation complete. Women with disabilities need the support and affirmation from which everyone builds their self-esteem, strong self-belief and ego. Sometimes the very families in which we grow up have not had the capacity to understand in themselves which things are the same and which are different in bringing up a child with disabilities. No-one gives lessons or supports on how to build resilience in our children. For too many young girls the family reaction is over-protection laced with rejection, perpetuating the child-like behaviours and infantilizing the adult woman. How then do we go into the adult world properly equipped for forming safe and fulfilling, loving relationships? Too many women with disabilities meet someone who appears to offer these attributes, but too late the façade falls away, and the reality of control, violence and abuse emerges. In this, too many women with disabilities are trapped. They live in constant terror. Having grown up in situations of abuse, denigration and belittlement, it is easy to believe that there is no other way of living. The normality of this entrenched situation is such that women with disabilities become inured to misogyny and disability discrimination. For all Australian women, there is no excuse for the alarmingly high levels of violence which permeate every corner both inside and outside the home. By August in 2015, the sobering statistic is that 55 woman have been killed through violence – one woman every four days across our country. Women with disabilities are included in this number. This scourge masks the reality that for every woman killed, there are countless others who bear, for life, the physical and emotional scars of the violence they endure. Women with disabilities are included in this number, but they are not counted, either literally or figuratively. The incidence and prevalence of violence against women with disabilities is largely unknown. It is a hidden blight on all of society. Thus the epidemic of violence against women with disabilities can be discounted and ignored. The effects of domestic violence spread ever outwards from the primary victim. In too many cases the witnesses to this violence are children. They are the secondary victims. And the effects are not fleeting. The physiological development of young brains is irrevocably damaged by the presence of fear and flight chemicals. Did we imagine that this would not be so? The damage done affects those parts of the young brain which control emotion and behaviours, so that, in a way, we can see a generational effect of violence. This damage to young children is a further crime and perpetuates the violence into adulthood. But women with disabilities will not be called victims, though we ache with silent tears. Somewhere within us is a part that is not touched by stigmatisation, belittlement and denigrations. This is not the way the world should work. Somewhere, from within our inner core, there emerges that kernel of strength. Somewhere there is hope. Women with disabilities who walk amongst us are a testament to this inner strength, and deserve our celebration.’

Sue Salthouse is a leading advocate for the realisation of human rights and fundamental freedoms of people with disabilities. She is particularly concerned with the intersecting discriminations of gender and disability which combine to lower the living standards and reduce life opportunities for women with disabilities. Within this power vacuum women with disabilities are subject to a high incidence of violence, abuse and neglect. Since sustaining a Spinal Cord Injury in 1995 she has worked tirelessly to address discrimination. She wears many hats in the community including as Convener of Women with Disability ACT, ACT Official Visitor for Disability and Co-chair of the ACT Disability Expert Panel advising the government on the implementation of the National Disability Strategy and the National Disability Insurance Scheme. Sue was ACT Senior Woman of the Year in 2014 and is now the 2015 ACT Citizen of the Year. Also in 2015, Sue was appointed to the Prime Minister’s Advisory Panel to Reduce Violence Against Women.

‘Even though I have moved on, and you know, I have a great life now, I want to show that there is life after those silent tears. I can smile again, laugh.  I’m not angry at him, I was angry at the time, but I have actually forgiven him for the pain and suffering he has caused me. This is to help me heal. I feel sorry for him because he missed out on a fantastic opportunity to spend the rest of his life with me. He can never take it away from me, the inner core the inner smile, the inner truth. I don’t know what it is, that core that everyone has no one can take that away from me, no matter how hard they try, I just know no one can take that away. There is no easy way to get out, its very hard to get out because there is that control and if they find someone that they can talk to , thats better than nothing, its like that little door that will get her out.”