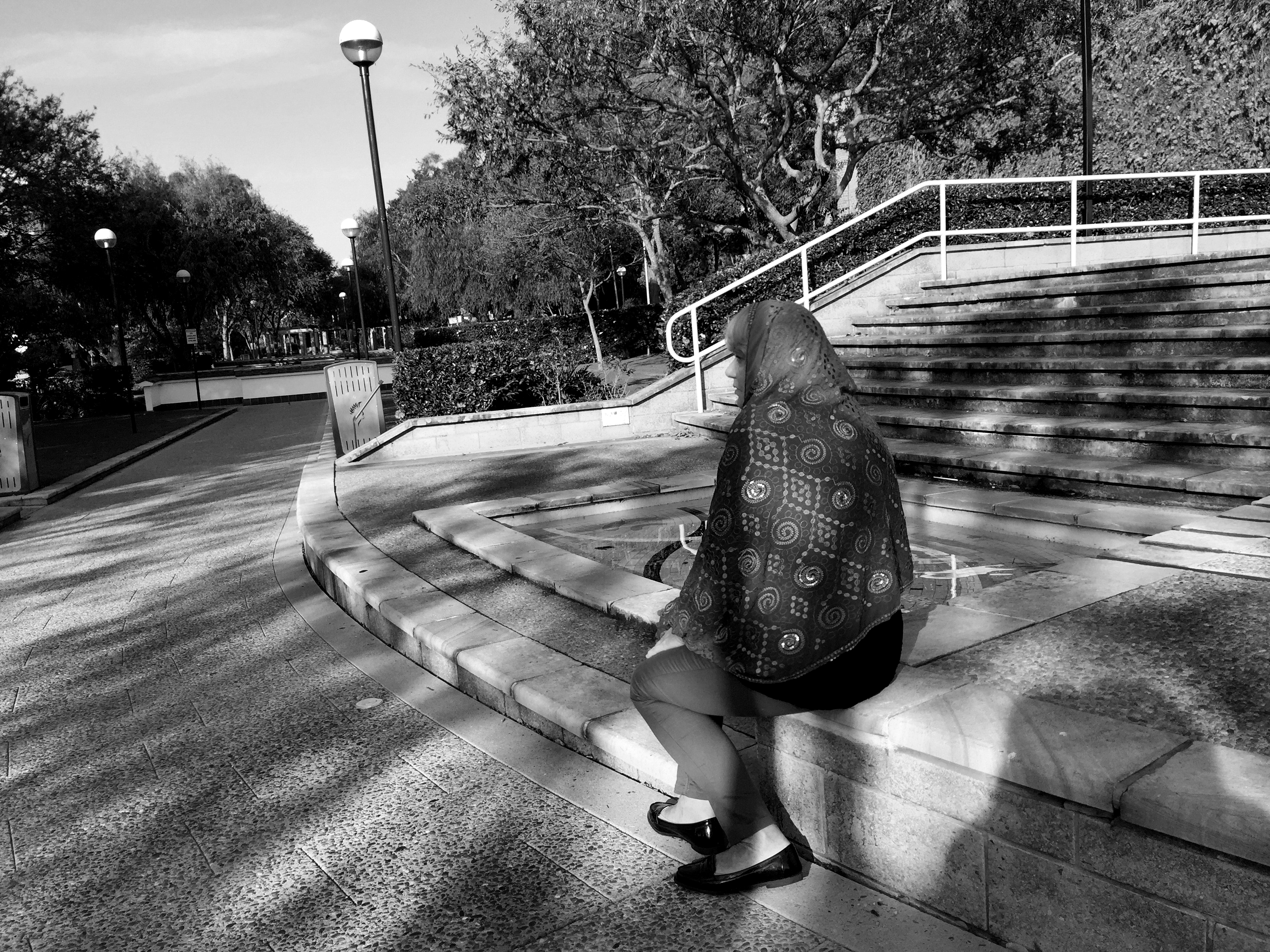 “As an advocate for people with disability, I work with people across the disability spectrum. I have done this job for seven years. I work in a regional office by myself. I love my job. It is the most satisfying job I have ever done and I have worked as a national union organiser and a community solicitor in the past. I never expected what happened to me and certainly didn’t expect the consequences.

I was working with my client, in my office, a man with intellectual and psycho-social disability and a history of being shockingly abused and neglected in institutional settings. He was a long term client. He began to become agitated and started throwing heavy objects around my office. He was distressed and had been triggered by denial of service by another organisation. He did not respond to my attempts to deescalate him. He got more and more agitated and more and more violent in his actions. He found carving knives in the cupboard and stood holding them as if to protect himself from attack.

Police arrived and approached him with tazers and guns drawn. I stood frozen, watching it all unfold, feeling powerless and waiting for the sound of the bullet. For me, that moment, I was stuck, frozen, it seemed to last forever. The bullet was not fired, my client deescalated and was lead away by the police. I was left to pick up the pieces. I felt alone and abandoned. I could not contact anyone from my organisation and when I did no-one came to help me.

I had to clean up the mess, give a statement to the police and take photos of the damage done. I had to talk to people about the incident. All I wanted to do was sit down and stare but I had to keep going. No-one came.

For weeks after the incident it was all I could think about, I couldn’t sleep or eat and it kept going through my mind, was it my fault, did I trigger him, could I have done more to stop him being arrested. I felt the professional obligation to this person but also the felt fear and pain of the near miss of injury to me. It was only quick thinking at the time that stopped me from being hurt by flying, heavy objects. What would have happened if I had been hurt or killed? – What about my children? – What would have happened if my client had been shot by the police? These questions kept going through my head. I jumped at every loud noise, I had anxiety in the pit of my stomach. I would sit and stare at the big hole in the wall of my office left by a heavy object that my client had thrown with force. Thinking what if that had hit me?  Then feeling guilty and worried about my client. Conflicted. No-one came to help me. My organisation let me down. No-one came. Two weeks went by before anyone came from head office.

It was like no-one believed me. I walked around with the photos of the damage to my office on my phone. I showed people when I talked about it. I felt I had to prove it. No-one from my organisation acknowledged my pain. I felt valueless and abandoned. I felt the stigma. If I had been hit by flying objects and had bruises, broken bones  I would have had sympathy, understanding. But the injury was in my mind, just as real as a broken bone, but not visible and no-one wanted to talk about it – too confronting. My injury was not validated – I was now one of those scary “mentally ill” people we all hear about. I was now one of those to be feared.

My family and friends were appalled and terrified for me. Wanted me to walk away from my job. Were shocked that the organisation I worked for had no real process in place to help or support me.

The ripples of this incident spread out to effect my wider circle of family, friends and colleagues.  Would this be the end of my career, no longer able to do the job I loved, no longer able to earn my living and put a roof over the head and food on the table for my children? I am a single mum and I am all they have. I was having to “keep it together” for them while I was falling apart inside.

Today, nine months after it all happened, I still deal with it, there are still triggers and anxiety, but I have come to terms with it, gone back to work, take each day as it comes. I still feel let down by my employer but I have to move on and survive for the sake of my kids and my life and my work.”

I have witnessed and worked with individuals presenting with Post Traumatic Stress Disorder (PTSD) and other stress related conditions, from CALD populations, refugee communities and domestic violence victims.

It is my professional knowledge of PTSD that victims of violence experience trauma which impacts on their lives and the lives of those closest to them. According to the DSM-V PTSD stems from exposure to death, life-threatening injury, or sexual violence has several impacts on the person’s life.

In the workplace this can mean the injured worker is unable to enter the place where the trauma occurred thus, rendering them unable to work or earn an income. This is a catastrophic outcome for the worker and their family.

Occupations with regular exposure to traumatic events have an increased risk of mental health problems including depression and PTSD. This includes police officers, paramedics, fire fighters, military personnel, medical staff and journalists. A recent review estimated that 1 in 10 emergency workers currently suffer from symptoms of PTSD.

However, PTSD is not solely associated with emergency work as evidenced in the literature that working in the area of domestic violence or disability can impact on the workers’ mental health.

High risk occupations involving regular exposure to traumatic events, are served well when the employer has an awareness of good mental health awareness in relation to their employees, enabling them to support them if and when trauma occurs.

A 2014 survey by the Australian Psychological Society (APS) found that interpersonal relations are the most frequent source of workplace problems and stress. Particularly, if there are indications of workplace bullying, social support in the workplace, as well as perceived support from the organisation as a whole to employees, appears to have a protective effect against mental health difficulties. Managers and supervisors play a clear role in the welfare of staff. The actions and opinions of someone in a leadership role can have a potent influence on a staff member at risk of mental illness.

Research shows that managers provided with mental health training feel more confident in discussing mental health matters and have staff that display reduced psychological distress. A mentally healthy workplace provides both a physically and psychologically safe climate for employees. This includes a commitment to stress management, addressing of environmental triggers, and participation of all levels of management in the development of safety frameworks and risk plans and post-incident risk assessments.

There may be long-term prognosis for the person with PTSD including its effect dredging up memory of previous experiences of trauma in their lives. Some of these include fear-based re-experiencing, emotional, and behavioural symptoms that may impact on family, friends and colleagues – such as arousal and reactive-externalising symptoms.

There may be combinations of any of these symptoms patterns. The disorder may be severe or long-lasting when the stressor is interpersonal and intentional (i.e. threatened or actual assault). The traumatic event can be re-experienced in various ways, commonly the individual has recurrent, involuntary and intrusive recollections of the event. A common re-experiencing symptom is distressing dreams that replay the event itself or that are representative to the major threats involved in the traumatic events. These traumatic reactions have severe implications for the individual’s personal life.

Problems at work can have an enormous impact on our mental health and wellbeing, as findings from the APS Stress and Wellbeing surveys have found. Organisational psychology research also shows that creating a positive working environment can have business benefits as well. Employees need to implement resilience training for high risk occupations such as those exposed to significant levels of trauma or stress through the provision of peer support schemes or other ways to ensure staff are able to seek help early if needed. Responding early and acknowledging a workplace trauma incident is essential for the best outcome for recovery of the worker.

Workers in the community sector, working with people with disability who are often, themselves severely traumatised, are at high risk of work place psychological injury. Organisations need to address this because the cost to the worker, their family and the sector is far too great if proper supports and responses and risk management plans are not in place.

“Police arrived and approached him with tazers and guns drawn. I stood frozen, watching it all unfold, feeling powerless and waiting for the sound of the bullet. For me, that moment, I was stuck, frozen, it seemed to last forever. The bullet was not fired, my client deescalated and was lead away by the police. I was left to pick up the pieces. I felt alone and abandoned. I could not contact anyone from my organisation and when I did no-one came to help me.”