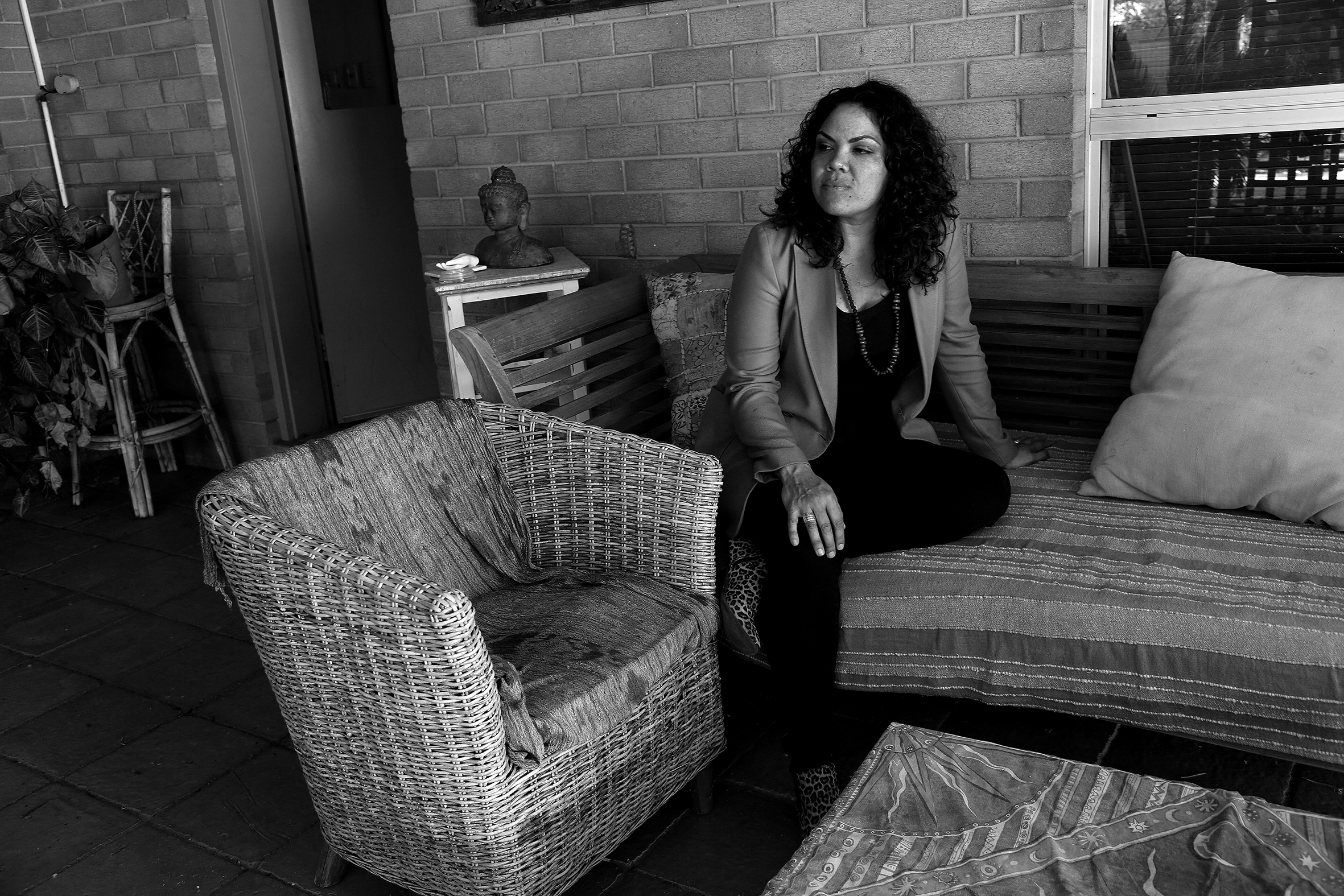 ‘My name is Jacinta Yangapi Nampijinpa Price. I was born in the tropical town of Darwin in 1981 to my Warlpiri mother Bess Nungurrayi Price and Australian born Anglo-Celtic father Dave Price. My dreamings are Yirrikipai (Crocodile) from my conception site on Melville Island in salt-water country and my inherited dreamings from my other Warlpiri fathers are Ngapa (Rain) and Warlu (Fire) from desert country.’

The following speech was written and spoken by Josephine Cashman at the United Nations in Geneva. It has been reproduced with permission and in support of Silent Tears participant Jacinta Price.  The author, Josephine is a Worimi woman from New South Wales Australia. She lawyer, business-woman and social entrepreneur with more than 20 years of experience working to create rapid business, social and economic growth for Indigenous communities around Australia. In 2013, Joesphine was appointed by the Prime Minister to the Indigenous Advisory Council and serve as Chair of the Safe Communities Subcommittee. Josephine has more than nine years in Australian courts.

‘We Australians should be proud of our achievements with gender equity, and our heightened consciousness of women’s issues. Our privileges and freedoms have led to a number of female leaders become great contributors to our successful multicultural society.

Although we should be optimistic about the progress we have made in formal gender equity, there are women who continue to live as second-class citizens and victims of violence and abuse that result from ugly attitudes towards women and children, including tolerance of abuse and violence, and low expectations of men’s behaviour. These attitudes prevent these women from living free of violence and contribute to a climate in which violence against women is condoned.

These women are the First Australians and their children. This is the uncomfortable truth that Australian governments need to confront honestly and urgently. While many Indigenous leaders and other activists claim the shocking Indigenous incarceration rates should be attributed to a racist system locking up Indigenous individuals for minor offences, the truth is that Indigenous prisoners are in the majority convicted of acts intended to cause injury. The truth is that for every Aboriginal offender there are usually at least two Indigenous victims. In the Northern Territory of Australia, the majority of Indigenous male prisoners are in jail for serious violent offences and the victims are in the majority their wives, girlfriends, mothers, and children.   Nationally, the Indigenous female hospitalisation rate for non-fatal family violence-related assaults is 35.7 times the non-Indigenous female hospitalisation rate for non-fatal family violence-related assaults.

From 2007-2008 in remote Central Australia, there was a domestic violence homicide rate which was the worst rate in the world. I would argue that tackling these rates should be the most urgent domestic priority. The uncomfortable truth is that, despite serious Government expenditure in most areas, all indicators are worse. Many Indigenous leaders and activist groups claim money and funding is the major issue to tackling violence. The truth is that all Australian Governments are spending an extraordinary amount of money on programs and services to change the disadvantage. In fact, there has been a whole of Government approach since the Closing the Gap targets since 2008 which has seen more than double the funding for Indigenous communities and programs.

There are three major factors entrenching violence and abuse in Indigenous communities; these are low expectations, lack of employment and poor social norms. Perpetuated and encouraged by those including many activist groups who paint Indigenous offenders as victims, rather than promoting personal responsibility and reform to encourage a cohesive culture of social norms for a safe society for all.

There are some who are trying to change this: Charlie King’s No More campaign in Darwin, now operating across the Northern Territory, and Andrea Mason, the Chief Executive Officer of the Ngaanyatjarra Pitjantjatjara Yankunytjatjara PY Women’s Council, Professor Marcia Langton, Gail Mabo, Minister Ken Wyatt, to name some of our best advocates for stopping violence against women and children. I work with a network of these strong women and men who are leaders working for safe communities for all.

I will highlight four examples of programs that are showing success and give my policy suggestions.

Charlie King of the Northern Territory developed a program to hold men to account and change social norms, the NO MORE campaign. The NO MORE campaign has the proven capacity to educate Aboriginal perpetrators of violence to find a way to live without causing harm to others. NO MORE does not intend to replace other campaigns, but to work collaboratively within them to bring about this necessary social transformation. This is evidenced by the success of Uncle Alfred’s Men’s Group of Townsville.   Based on the NO MORE campaign model; the results demonstrate the success of a culturally appropriate program and how vital it is to have Aboriginal community leadership and cultural relevance. In 2015, the program attracted 750 young adult males and to date one has re-offended.

Andrea Mason’s program is an example of a community and women’s empowerment program. For 20 years the NPY Women’s Council has been providing a Domestic and Family Violence Service that supports women and children who are the victims of family and domestic violence in very remote communities of the Northern Territory, South Australia, and Western Australia. The service’s goals are that Aboriginal women and children should be offered the full range of protective measures that women and children can expect elsewhere in Australia. The service includes legal support, crisis intervention and ongoing case work, intake and assessment, a primary prevention program, advocacy at community and service administration. The service results in outcomes that prioritise women’s and children’s safety. NPY Women’s Council model was independently evaluated and found to be effective and innovative.

NPY Women’s Council calculates that Aboriginal women in the region are around 60 times more likely to be victims of domestic homicide than are non-Aboriginal women.

The most common source of violence is physical which often involves the use of choking or strangling – a tactic known to be an indicator of particularly high risk of homicide in domestic violence incidents. The most common weapons used in these assaults are usually household implements and rocks, followed by an iron pole and knives. Women report being punched, kicked, deprived of their liberty, threatened verbally and raped.

With these horrific examples how valid is the constant claim from some that the imprisonment rates reflect a racist system of justice when there is limited protection for victims being attacked with weapons, punched, kicked, raped and chocked?

While it is true that we need to ensure these type of services receive adequate funding to meet the chronic needs of victims of violence and reforming offenders, we must also examine innovative and sustainable models that address the violent behaviour of offenders to make our communities safer. As an example, the Northern Territory’s Sentenced to a Job program is proving that economic opportunities reduce the risk of reoffending through private sector employment. With Northern Territory businesses offering these jobs, the reoffending rates went from 76% to 20%. The program is cost-neutral, with prisoners funding their imprisonment accommodation costs from their salaries.

All governments should invest money in sustainable financial models like Sentenced To A Job that provide incentives for offenders to reform their lives. There needs to be a commitment to ensuring victims are safe with adequate funding of safe houses and the rule of law applied responsibly to protect them and to deter others from inflicting violence on women and children.

The government should examine private sector funding models to develop new innovative models to invest in sustainable employment, training, and education of prisoners, as well as behavioural training to instil acceptable social norms. If we hope to stop the waste of public funds and address the uncomfortable truth of the tragic violence against Aboriginal women and children once and for all, it is essential that the safety of victims is of the highest priority.’

Naila Amin is a 26 year old Social work student and Activist to end child marriage.  She is also a member of the UN NGO on Sustainable Development – NY. She dreams of opening up the first group home for underage teens escaping forced marriage and honor violence.