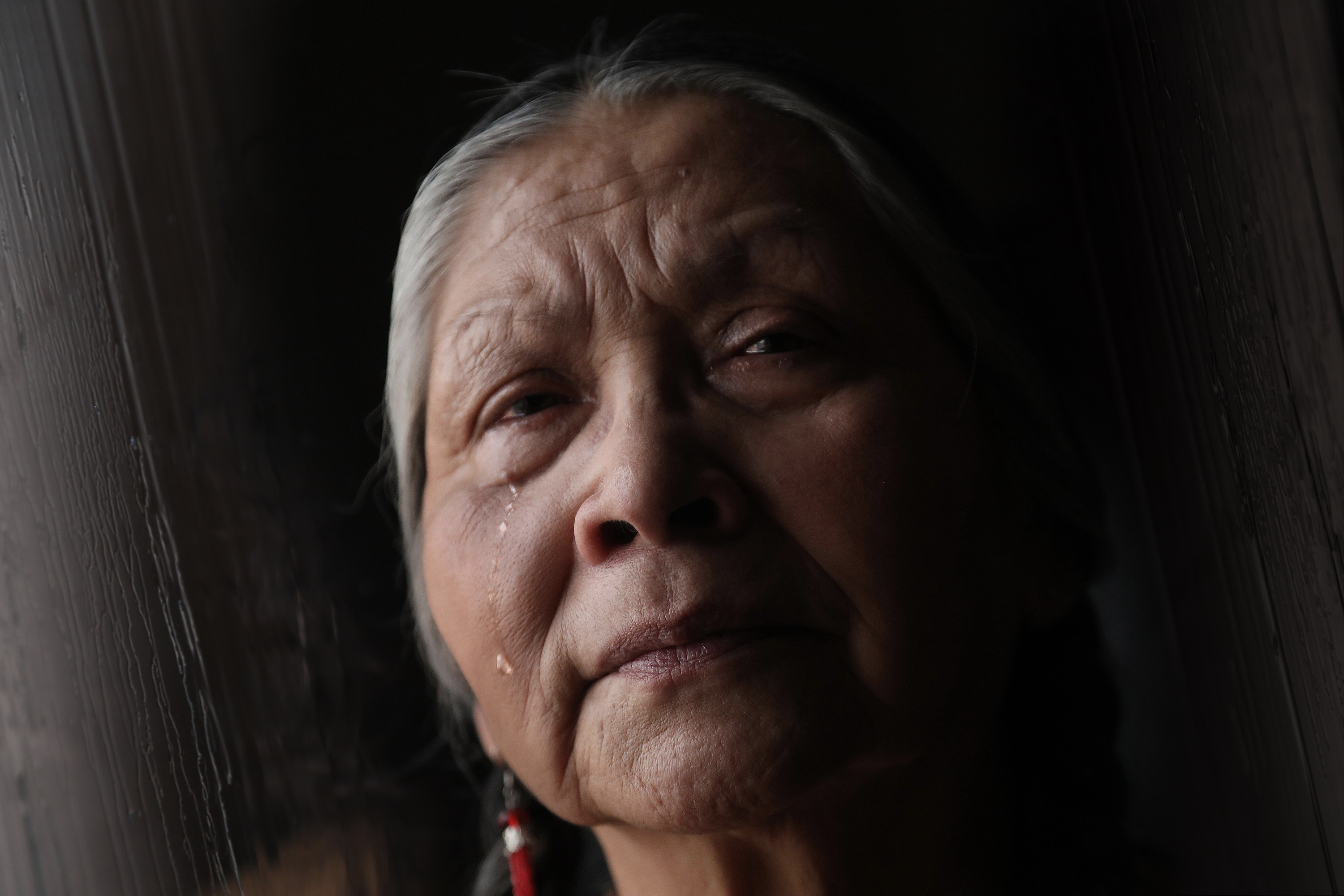 “My name is Mona Stonefish. I’m Mohawk of Kahnawake of the Six Nations Confederacy and Pottowatomi Anishinaabe [also spelled Potowatomi or Bode’wadmi] of the Three Fires Confederacy. I’m Bear Clan. When I was seven years old, I was stolen from my family and taken to the Mohawk Institute residential school in Brantford, Ontario. I am one of many whom the Churches, Board of Education, and the State of Canada stole from our homes only to rape, and murder us. I survived the horrors there. I was not allowed to speak my own language or practice my own culture, but I rebelled against my oppressors. Because I could already speak Anishinaabmowin I had strength. Within a month of arriving, the physiological, physical, and sexual abuse by multiple perpetrators began, and I endured 14 years of endless violence. I survived but many did not. Children died trying to run away. Others chose to end their lives rather than endure another day and another night. Many more died of neglect and abuse at residential school.

The ones with the light skin and blond hair got to serve and sit at the staff table. They ate better food than us. The staff treated us differently according to the colour of our skin. The rest of us often ate rotten food. I had to cook. We were all really small children working in the kitchen. We could barely pick up those big bags of potatoes… it took two or three of us working together. We only weighed forty or fifty pounds ourselves. I remember one time in particular we were forced to eat rotten potatoes. You know how terrible a rotten potato smells right? Well they made us cook rotten potatoes and put peanut butter in it to mask the smell. If we did not eat we were beaten and not given food for the next while. Seeing our pain and being able to abuse us seemed to give pleasure to the people working there. One woman, a chain smoker, she really enjoyed hurting us. She had a leather strap. And we had better not get sick. So we went through with [eating] it. Everyone had to eat it [that rotten food]. Some people get sick from eating rotten food. We didn’t want to be sent to bed for being sick because someone would come in and rape us even when we were sick. They were terrible, terrible people. At some point a group of us kids tied that damned Charlie Chicken up and threw him down a stairwell so he would stop molesting us. I think lateral violence in our communities today is directly related to residential school violence. I think we are still fighting for the right to say that we are Anishinaabe, and the government is saying otherwise.

There was one woman there, a Jewish woman Jean H., who survived Auschwitz. She did not or could not help me. She was the piano teacher. She did not live on the premises. She only came in during the day. Walking down that hall to the music room was where we would get raped. I was only there [at residential school] two days when I was first raped…I was seven years old. One of the students Roxanne suggested that we walk together so that we might have safety in numbers. But that didn’t always work either. The other students called me a step-and-half as a joke so we could survive with laughter. I walked with a limp after my rapist broke my leg when I fought back. I was not even given proper medicate care for that so I still suffer with that injury today. My Grandmother told me before I was stolen, ‘If they ever take you remember you won’t be gone forever. Whatever happens to you there, my girl, it’s not your fault, don’t ever blame yourself because you’re a child. Don’t ever forget who you are, your language and our way of life.’ I told Jean what my Nokomis told me and she said, ‘your Grandmother is right.’ My Grandmother’s words gave me hope.

I told Jean, ‘You always say you’re going to help me but you don’t.’ She said, ‘But your safe here, you have a moment of solace with me.’ I guess that’s what she meant when she said she was helping me. I did look forward to seeing her and to playing music. She said I had a natural talent for it. But that ended when I was brutally beaten and raped on my way to see her one day… so I never returned.

I was beaten so badly that I could not speak because of the trauma – I was in a catatonic state for a long time. After that I could not utter a word for years (until my aunt helped me when I returned home from residential school). Those people who worked there acted as though they were so righteous during the day, but at night they were terrible and repulsive. They were sadistic pedophiles. We were just like little frozen shells. I think it was being Anshinaabe that gave me the strength. How I was able to block that out, those terrors. They couldn’t break me, because I have my language and my culture. I have the scars of PTSD and physical disability resulting from a broken leg and a displaced pelvis, but I am resilient. I’m not just a survivor. No, I have learned how to thrive and love despite the horrors that I experienced at residential schools. I can say that I just can’t stand nonsense though.

Trauma comes in a lot of different ways. Who in their right mind would take children away from their families. My parents couldn’t read or write but they were hard workers with the most beautiful gardens. They had a deep respect and knowledge of the land and all life. My grandmother died and I was not there because I was locked up. You get this emptiness when they pass away. Strength it comes from our blood memory and our ancestors. Because they couldn’t see us in person that’s how we messaged each other [across time and space, nonverbally].

But leaving the residential school did not end my story. On December 10, 1968 my third son was born. They stole him from us on December 13, 1968. I found my son P. Michael Stonefish 24 1/2 years later. My granddaughter Sky Stonefish has lived with me since she was 15 months old. She is one of the greatest teachers one could ever meet. Sky is 22years old now.

I always remembered and have never forgot the lessons I was taught by Grandmother, these gave me strength and helped me to survive the most heinous crimes that any human being has to experience. My Grandmother had shown me how to find medicine and she instilled in me an important message that I pass on to my own family, and that is to hold on tight to what is really ours, and that is our language and culture, ‘If you have that, nothing will stop you.’

This resilience has empowered my life ever since. Rather than letting pain consume me into bitterness, I choose compassion towards others. We have so much to offer, we can’t allow the residential school experience to be our legacy. For my people, we believe that our history and our teachings are safely guarded within our own Clans and our people. We will teach from our point of view, because that has not yet been heard.”

Kahnawake Mohawk of the Six Nations Confederacy and Pottowatomi of the Three Fires Confederacy. Bear Clan.