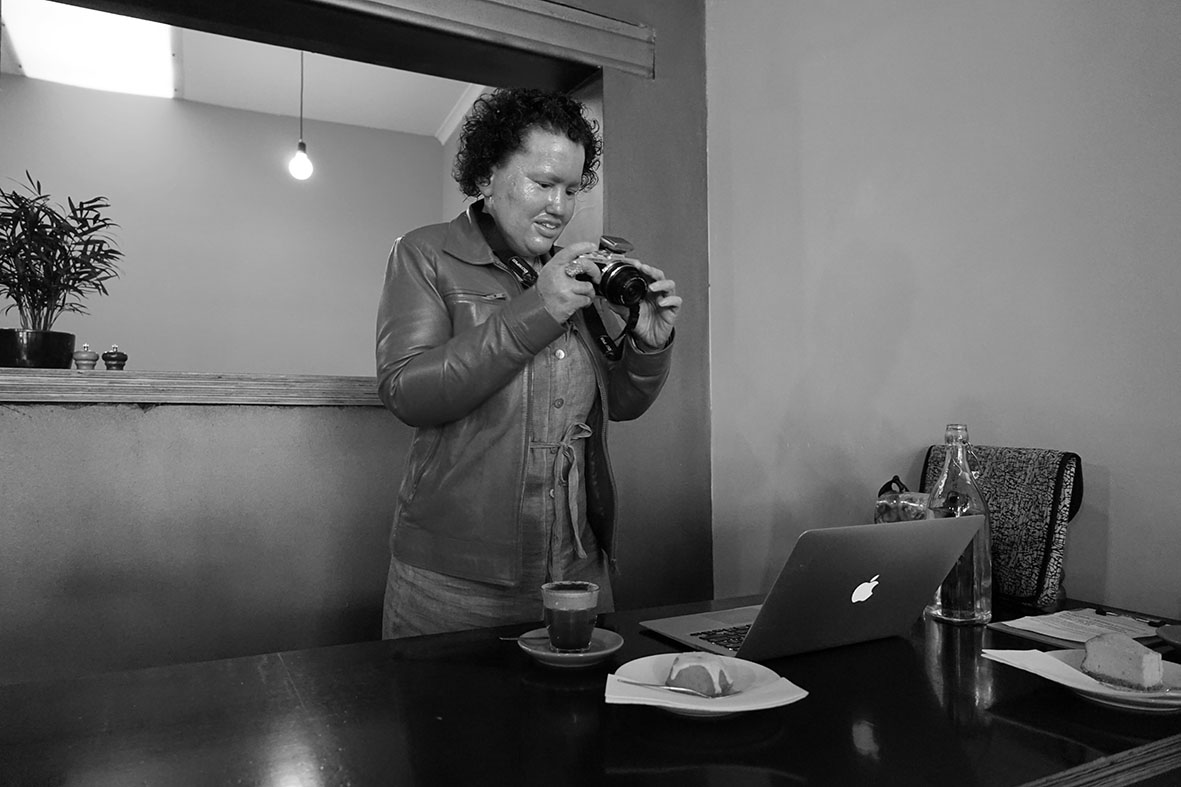 “Maybe having to justify how I look to a stranger and having to tell them something, I guess that I don’t think that they need to know. So, for example they will find it ok to ask me a question, like ‘You look sunburnt’ or ‘you look red’ or ‘why do you look the way you do’ or ‘have you always been like this’. So while they’re thinking they’re being curious and that’s important to learn I’ve received that comment or question many times before so that’s tiring. And I think that while it might be well intentioned it can be difficult and also you never quite know how the day’s going to go. Normally it’s fine but then sometimes I could be feeling really good about myself and have someone ask a question or comment or stare or whatever.

I think that it happens to a lot of people who look different and I don’t know whether other people that don’t look different can quite understand, they say that person’s only curious, or they’ve got the best intentions or I don’t think they meant any harm, or that wasn’t really rude, but for the person on the receiving end it’s a lot different.

So a few years ago I had three experiences of harassment or discrimination in a taxi. So the first time was in an airport and the guy asked me what my cream was and what was on my face and he didn’t believe me, because I took out my jar of cream to put some on my face in there. I wasn’t touching any of his car or anything, just my face. And he asked me what it was and I told him and he got really scared and defensive and didn’t believe me that I was born with this condition and I felt quite unsafe because we’re in the car driving when this was happening and when we got home he said, ‘ I don’t believe that you’re born like this, ‘you’re putting it on’. And then the second time I was coming back from a band. It must’ve been about 1 in the morning and I had to get a taxi with a friend. And I’ had maybe two drinks, maybe three drinks at the most but early on in the night so my last drink would’ve been you know two hours before and he told me that I looked too drunk to go into the taxi so I wasn’t slurring my words I was looking like I always do but he thought my redness was a sign of drunkenness and I was with a friend and I don’t think that she knew how to respond because she didn’t really say anything in my defense so I have to take it on. I’m not expecting others to respond but it can be awkward if another person’s there and they don’t really say anything.

And then the last time that it happened was when I was at a conference and the lady I was working for– I was speaking at the conference the next day but I was there for the dinner that night– and she said to me, ‘Could you get a taxi voucher I’d like to see you egt home safely’ and I said no that’s fine I get the train all the time and she said ‘No get a voucher, I need you to get home’ and I said okay.

So they called me a cab at the hotel I was at and then the driver, he asked me what was on my face and I said nothing because there was nothing and then he said, ‘No, what’s on your face’ again and I asked, ‘do you really need to know’ and he said ‘yeah you smell. Like I’m really worried, get out of my car. Your face and your smell is going to ruin my car’.

And said, ‘Well I don’t really think I smell’

Anyway, we were still stationary then so I got out of the car and told him to fuck off and then I went back into the hotel, and I said could you call me another cab and then after that when I got into the other cab I tweeted straight away about what happened and then the next day I wrote about it on my blog. And fortunately because they had made the booking at the hotel, they had the driver’s details because they booked through 13-CABS and after I wrote about it made the national news which was I guess exciting but again then I had to defend myself against online trolls, you know, saying, the driver had every right to ask what was on my face and you know, of course he should’ve been scared because I could’ve damaged his car or I could’ve got it dirty or whatever so there was that to contend with and I had people come to my blog and say, ‘you should’ve been run over by the taxi driver’ or ‘you’re so ugly and fat’. Just people that cant put their face to their name really.

I think that some people have to practice resilience occasionally but perhaps for people with disabilities and differences they have to constantly be resilient and constantly bouncing back. And if resilience is a measure of how quickly we bounce back I could be an Olympic trampoline. So this is just how it is. I shrug it off. I’ll feel less sore soon. I’ll tell my loved ones who are frustrated about the pain I experience. And I know that I’ll have days when I’m sore, but I’ll always say there’s light outside the darkness. And I’ve come to accept it. But I think that it can be tiring having to prove why I look the way I do. Or that I’m more than who I look or what I look like all the time. Acceptance’s not giving in it’s being really happy with who I am and being really comfortable with how I look and I guess having the confidence to look someone in the eye when they’re not confident enough to look me in the eye. People are very scared of at people with facial differences and if I can look the world in the eye when they can’t look me in the eye then I think that’s pretty big achievement.”

Carly Findlay is a blogger, writer, speaker and ‘appearance activist’. She challenges people’s thinking about what it’s like to have a visibly different appearance. She’s written for many publications including The Guardian, Daily Life, The ABC, Mamamia, Frankie magazine and BlogHer. She’s uses her blog to write about her skin condition, Ichthyosis, as well as promoting causes such as Love Your Sister and Donate Life. Most recently, Carly was named as one of Australia’s most influential women in the Australian Financial Review and Westpac 100 Women of Influence Awards for 2014. She received the 2010 and 2013 Yooralla Media Awards for Best Online Commentary for her disability-focused writing. She also won the best personal blog category for Kidspot Voices of 2013, and the 2013 BUPA Health Activist award for Positive Life Change. She’s also been a finalist in the Best Australian Blogs competition in 2011, 2012 and 2014. Carly is an accomplished speaker – she’s spoken at the University of Western England’s Appearance Matters conference, the Melbourne Writer’s Festival, Problogger, University of Melbourne, Royal Melbourne hospital and Cancer Council of Victoria (to name a few).

‘If resilience is a measure of how quickly we bounce back, I could be an olympic trampoline. So this is just how it is, I shrug it off, I’ll feel less sore soon. I’ll tell my loved ones who are frustrated about the pain I experience and I know that I’ll have days when I am sore, but I will always say that there is light outside the darkness. I’ve come to accept it, but I think that it can be tiring having to prove why I look the way I do.’